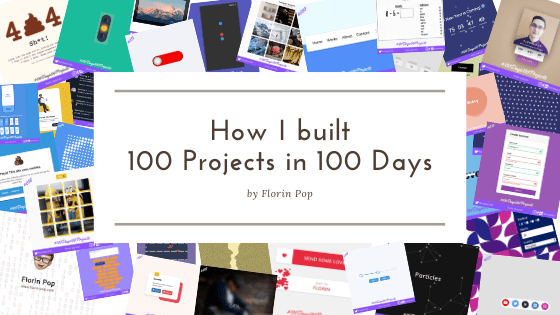 Yesterday I finished the #100Days100Projects challenge 🥳 and in this article I’m going to cover my experience doing this challenge and I’m also going to answer some of the questions that I received on Twitter about this.

It would be an “ask and answer” type of article so I hope you enjoy it! 😃

What is this challenge about?

The main purpose of this challenge is to build a project every single day for 100 days in a row. You can read more about the rules here. (Note: there is also an easier variant: #30Days30Projects, in case you are interested for something lighter 😃)

What projects have you built during the challenge?

In the last project (#100) I added all the projects that I’ve built during the challenge, so if you want to check them out click here.

All of the projects were web based - frontend mostly (HTML, CSS, JavaScript), and some of them had a little bit of NodeJS for the backend.

I used all sorts of APIs, some JS libraries (ReactJS, p5js - for working with the canvas), but most of the projects were done with Vanilla JS and CSS.

How do you come up with so many ideas?

Apparently a lot of people have asked me this question over these 100 days.

The truth is that I gathered a lot of resources over the past year because I needed inspiration for my articles, videos, etc, and I’ve used them to get inspiration for these projects also.

Also, doing this creative process over and over and over, you end up eventually getting ideas from all the things around you. There are some projects that I did because I saw a need in my day-to-day life (Drink Water app, Random Picker Visualizer, Countdown, Password Generator, etc…)

Let’s not forget also that some of the projects were suggested by my followers. (Thank you guys 🙏)

The resources that I’ve used mostly for inspiration:

Did you have a plan for a longer period of time or you did it spontaneously?

The rest of them were just done spontaneously.

But I wouldn’t recommend doing it. It’s much better to have things planned out - it gets rid of the headache you might get when you have to come up with an idea right away.

Why you did it?

As simple as that.

I love pushing my limits and this challenge looked like one that could do that (and it did!) Also, I’ve noticed that if I publicly announce that I’m doing something, I end up actually doing it - maybe because of the shame that I would feel if I fail. I don’t know. Haven’t failed a challenge yet. 😆

The first challenge I did was a 365 days of running challenge. I publicly declared on Facebook that I’m going to do it + I posted a picture daily with me after my runs and this gave me the strength to finish it (actually ended up doing 422 days). I couldn’t fail my followers, right? 🤪

And on the other hand, I knew that if I’m going to post daily I will inspire others. I want to show people that even ordinary people like us can do stuff if we set our mind to it. We have a powerful mind, we just don’t use it at its full capacity!

Yes. I am an ordinary guy. Nothing special here. So if I did it, you can do it too!

How much it took to create a project?

Some of the projects I did in under 30 minutes, a couple took me 6-8 hours and 1 or 2 I had to “postpone” on to the 2nd day because I couldn’t finish them. Although I postponed these projects to the next day, I recreated them from scratch - only using the gained knowledge. This turned out to be a good way to get "unstuck". Just redo it from scratch.

I would say that I needed around 1-1.5 hours on average per day. This includes: idea + execution + social media.

Keep in mind that I’ve been coding since 2013 so maybe someone with less experience would need a little more time, but it really depends on the project difficulty.

What motivated you to keep going?

As I mentioned above, I think that the shame of failing kept me moving, considering that I publicly committed to the challenge. I can’t fail my audience!

I had a $25 “punishment fee” which I would have to pay for the failing days, but I don’t think that I ever thought about it after I started.

I added the money aspect because I knew that it would be engaging for people to have it and some of them would want me to fail (sneaky you! 😜) so they would check in daily - which ended up giving me a small boost of views on my posts 😁.

What have you learned during the challenge?

I’ve learned a couple of things:

It ended up helping me solidify my vanilla JS and CSS skills!

What would you do differently?

One thing that I’ve noticed is that there were more simpler projects that I initially planned. I expected to have more apps with multiple functionalities, but considering the fact that this challenge wasn’t the only thing that I had going, I ended up doing more simple projects (like just a design implementation with HTML/CSS, no JavaScript).

If I would ever do this challenge again, I would either:

This way I could do more “sophisticated” apps.

Nevertheless, I’m happy with the projects that I’ve done considering the given situation.

Also, I ended up spending a lot of time posting on Social Media (Twitter, Linkedin, Facebook, Instagram - for which I created a new image every time).

Maybe a good system to “share everywhere” would help to speed up the process.

Don’t get me wrong, posting on SM is important and I wouldn’t drop it, but I would speed it up if possible.

Should people do this challenge?

Should you do 100 days? Depends.
Do you have the time? Then do it. Otherwise I would only do the 30 days variant.

What’s next for you?

For 2020 I’m planning to go all-in on YouTube so I’m going to start the year with a 31 days 31 videos challenge (more about it coming soon). I want to have a solid backlog of videos for my youtube channel so this challenge goes very well for that.

Who knows… maybe I’ll keep doing it if everything goes well.

If you have any other questions, let me know and I’ll be happy to answer and update the article!

I hope this was helpful for you!

Thank you for reading! 🙏